The project devel­opers at Quest focus on properties and plots of land in the city centre, one of which is located right next to Hamburg’s “Hotel Vier Jahreszeiten”.

Hamburg. The incon­spicuous brick building is located on Große Theater­straße – only a few metres from the Binnenalster and in the direct vicinity of Hamburg’s “Hotel Vier Jahreszeiten”. Theja Geyer and Jan Rouven Künzel, Managing Partners at Quest, have a vision for this prime location: a luxury boutique hotel with around 100 rooms.

The existing building is to be demol­ished and by 2021 this site will become home to a new seven-storey building with a white façade and French balconies. “The location is perfectly suited for a hotel. In addition, the property is not a listed building, which means that demolition is possible. We are already talking to possible operators. There is great interest,” said Künzel in an interview with “Hamburger Abend­blatt”. The aim is to design an individual hotel that meets the highest standards and is an unpar­al­leled feature of Hamburg’s city centre.

It’s all about the location
The two Quest managers are at their office on Hohe Bleichen. This is where business partners are welcomed into generous, light-flooded rooms. The two project devel­opers founded the company in June 2016 together with lawyer Detlef Broszehl and ship owner Erck Rickmers, who is also chairman of the advisory board. They have since been on a shopping spree. The city centre and the old town are their hunting ground. One of the properties is the building on Große Theater­straße: “For us, it’s always about the location. We specialise in refur­bishing or extending existing buildings, or even listed buildings. But, of course, we are also open to new construction projects,” states Künzel.

These roads are under construction
Currently this is the case at “Neue Burg” right next to St. Nikolai memorial. The building pit has already been excavated. Based on the plans of Hamburg archi­tects Stölken Schmidt, an office building is to be created here by 2020. The property will comprise 6,500 square metres of gross floor area, including retail and restaurant facil­ities on the ground floor. In addition, Quest is also devel­oping the “Cremon 1” site: “The site is located in the heart of Hamburg’s old town, close to the former harbour gate. In 1188, the devel­opment of the Port of Hamburg began in this historic place,” says Künzel. The new building was designed by the renowned Hamburg archi­tects gmp Architekten Gerkan, Marg und Partner. Overlooking Nikolai­fleet, offices as well as ten high-end rental apart­ments are to be built here by 2020. The adjacent office building from the 70s is also part of the project and has already been modernised.

Driving along Baumwall in the direction of Landungs­brücken, a striking building at the street corner opposite the under­ground station catches your eye. We are talking about “Überseehaus”. Built in the early 1980s, it was acquired by Quest and Allianz last year: “We are modernising this building, creating a presti­gious entrance area. We want to redesign the attic and optimise the use of space,” states Künzel.

The two project devel­opers have been working in the industry for 14 years. Most recently, when working at Art-Invest, they oversaw the revital­i­sation of the building complex of the former Vereins- und Westbank on Hamburg’s Alter Wall. But the real estate experts “wanted to do something of their own.” “We found the right partners in Erck Rickmers and Detlev Broszehl. We take care of the operative business,” says Geyer. 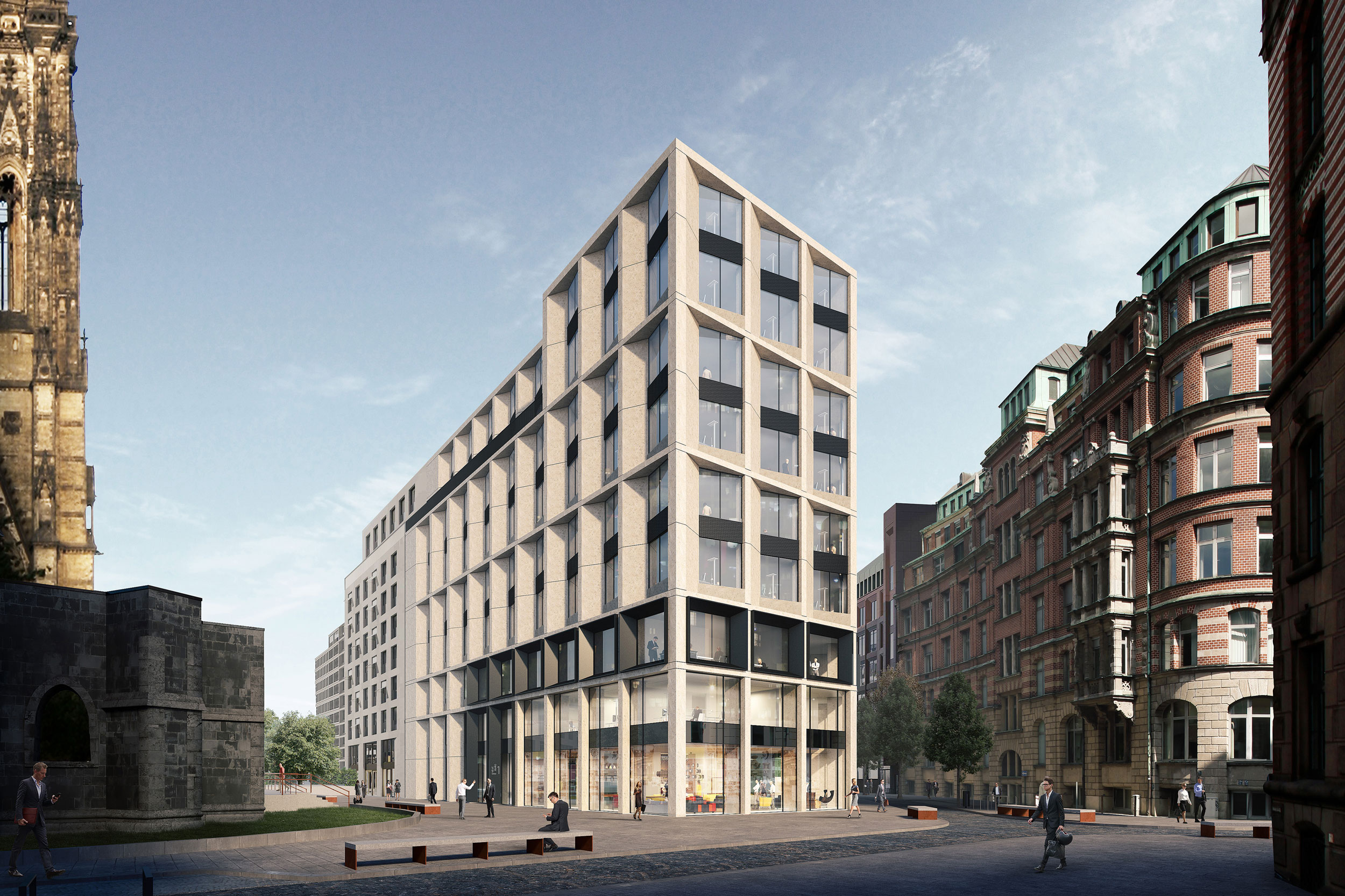 A new building is being constructed on the street Neue Burg. There, an office building with areas for retail and catering on the ground floor is to be built. The design is by the Hamburg office Stölen Schmidt Architekten. 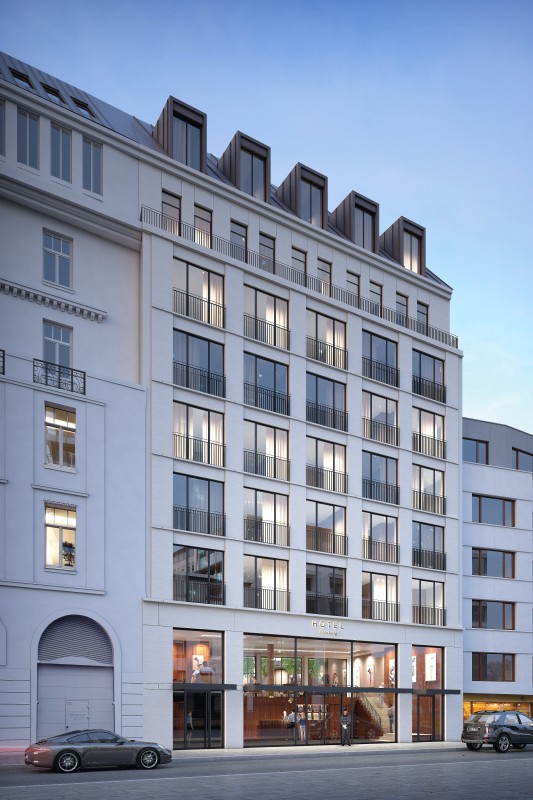 A luxury boutique hotel (l.) is to be built on the Große Theater­straße, right next door is the Vier Jahreszeiten.

20 employees are working for the project developers
Quest’s total investment currently amounts to around 660 million euros. Since its foundation, the company has acquired 19 properties in Hamburg. Kallmorgen Tower on Willy-Brandt-Straße, a listed building dating back to 1968, is one of them. The provider Spaces has since turned the high-rise building into the city’s largest co-working space. The portfolio also included the historical Kontorhaus building “Elbhof” on Steinhöft, which is being used as an office space. The properties usually change hands after revital­i­sation or construction is completed. The buyers include insti­tu­tional investors such as pension funds or major private investors.

20 employees are currently working for the project devel­opers who have also opened an office in Berlin: “Of course our heart is set on Hamburg and we are looking into further acqui­sition oppor­tu­nities in central locations here. But the Berlin market is extremely inter­esting, as there are still some places that will develop positively in the coming years,” says Künzel. The properties in the German capital include the “Lenzhaus” on Kurfürsten­straße, which was built in the 1920s. It is reminiscent of American high-rise buildings from that era.

Geyer and Künzel focus their project devel­opment “exclu­sively on major German cities.” This is why they also operate in Frankfurt am Main, where they acquired the former “Hotel Hohen­zollern” not far from the central station. The building from 1910 will be converted into an office building with retail and restaurant facil­ities. A new project is also due to be presented in Munich in the coming weeks.